The TechCare project was showcased during one of the sessions at the 72nd Annual Meeting of the European Federation of Animal Science, held in Davos, Switzerland at the end of August 2021. The Precision Livestock Farming session, which took place on Monday 30th August, was chaired by Ilan Halachmi and Jean-Marc Gautier, our TechCare colleagues from ARO and IDELE, respectively. Out of the 9 interesting presentations of that session, 5 were dedicated to TechCare. The session started with an update of the project, by TechCare coordinator, Claire Morgan-Davies (SRUC), who presented the over-arching latest advances of the multi-actor approach project.

This was followed by WP2 leader, Cathy Dwyer (SRUC), who explained how the TechCare project has been developing a welfare prioritization for small ruminants. Cathy described how, by building on previous EU funded work in the AWIN project and a literature review, a preliminary list of 80 welfare issues per species was developed, considering all the issues along the production chain. Within the TechCare experts, the lists were then prioritized to develop a shorter list of approximately 30 issues per species and management systems. The most important issues that span systems included: disease, lack of sufficient colostrum in lambs/kids, and heat stress, with issues of gastrointestinal and ectoparasites and undernutrition being important in grazing systems, and environment and competition between animals more relevant in housed systems.

Evangelia Sossidou (ELGO-DIMITRA), the WP1 leader, was next on the stage to present TechCare’s stakeholder co-design approach for improving small ruminant welfare. Evangelia covered the TechCare strategies to manage animal welfare using innovative technologies, that are investigated through a multi-actor approach which considers the local SR production systems and involves all relevant stakeholders, from farmers to transporters, slaughterhouse, consumers and regulators. 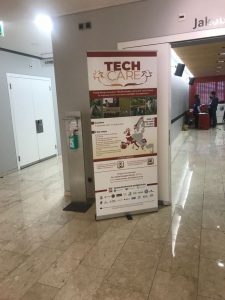 WP3 leader, Eliel Gonzalez-Garcia (INRAe) then showcased the work he and his WP colleagues have done, looking at the state-of-the-art in precision livestock farming technologies for monitoring small ruminant welfare. A scientific literature review with 67 keywords was launched by TechCare partners, using several engines. A total of 991 abstracts were identified. Records entailing both Tech and Care (TC papers) were retained and classified according to the Tech and targeted Care indicators, animal species, production type and farming system. The outcome was a shared database compiling details of 368 abstracts. Preliminary analyses show that the most frequent Care issues are related to malnutrition (monitored by behavioural sensors), general or chronic fear, transport and heat stress. Image analysis (video camera) is the most quoted Tech, followed by GPS (mainly for animal geo-referencing), accelerometry, heart rate measures and ultrasonography. Eliel concluded with the need for further research to effectively match Tech and prioritised Care issues in the context of the TechCare project.

Finally, Michelle Reeves (SRUC PhD student) presented preliminary results of her PhD studies in Scotland in relation to TechCare. Michelle is primarily looking at animal-based indicators to improve small ruminant welfare using precision-livestock farming, and her project focuses on identifying valid, reliable, and feasible sheep welfare indicators that can be measured by PLF technology in extensive systems. Michelle explained how it will be achieved by examining three examples of sheep welfare concerns: lameness, gastrointestinal parasitism and mastitis. The behaviour of sheep affected by these conditions will be assessed using quantitative and qualitative methods. Michelle concluded that although her project will partly consist in continuing the ongoing validation work for wearable technology, it also aims to gain understanding on the application of more passive sensor systems, which are less costly and thought to be more acceptable to sheep farmers.

These presentations have been very well received by the EAAP conference attendees, with many questions both from the room and from the online participants. It was an excellent opportunity to present the latest endeavours of TechCare to the wider research and industry community.

© Copyright EAAP / The sole responsibility of the content of this website lies with the authors.The Research Executive Agency is not responsible for any use that may be made of the information contained therein.

Menu
Manage Cookie Consent
We use cookies to optimize our website and our service,  to personalise content, to provide social media features and to analyse our traffic. You may read more about any of the purposes or vendors that we use by clicking our cookie and privacy policy links below. Also you can set your preferences, accept or deny your consent. Use the “Accept” button to the use of such technologies.
Manage options Manage services Manage vendors Read more about these purposes
View preferences
{title} {title} {title}